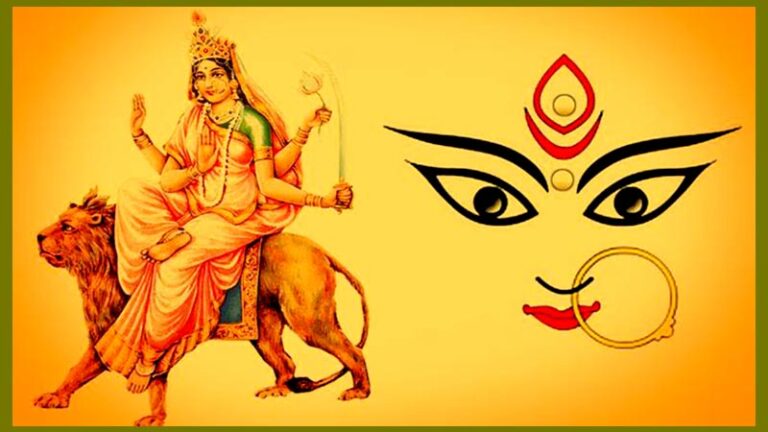 The Goddess Katyayani, sixth form of Maa Durga, appears in various Holy Scriptures as a symbol of strength, knowledge, and victory of good over evil. She is an inspiration for devotees, especially female devotees and inspires them to face challenges in life. Katyayani Mantra is a popular mantra chanted by girls of marriageable age to invoke the blessings of Maa Katyayani.

It has been said that Goddess Katyayani mantra has its origin in Bhagwat Purana, wherein Gopis used to chant this mantra to get married to Lord Krishna. It is believed that those girls who chant this mantra get the blessings of Maa Katyayani and get their dreams accomplished.

Young female devotees use Katyayani Mantra for marriage with their love, or if their marriage is being delayed,  or even if their marriage chances are being affected by the wrong positioning of planets. So if you have the Mangalik Dosha or Kuja Dosh, then again Katyayani mantra given below is the right mantra for you.

How to Chant Katyayani Mantra

Rosary (Mala) to be used for Chanting Katyayani Mantra

Flowers to be used for Katyayani Mantra

Frequency of Japa for Katyayani Mantra is 1,25,000 times

Shukla Paksha or during Shubh Tithi, Shubh Nakshatra and Chandramavali

As you start chanting the above Mantra in case of all the above-stated problems, you will be surprised to see how your wedding gets fixed and the problems resolved.