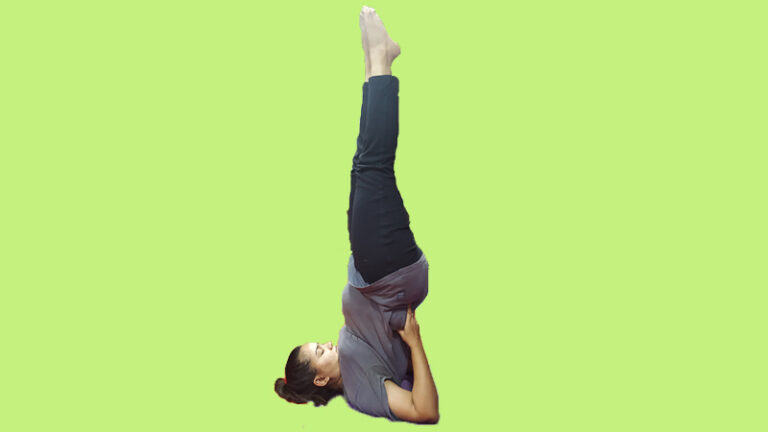 Although the word Sarvangasana translates as “all limbs pose,” this Yoga Pose is also called Shoulder stand Yoga pose because, in the final pose, body weight rests on the shoulders. Sarvangasana, an inversion, reverses the action of gravity on the body. Sarvangasana has a refreshing and revitalizing effect on the whole body. It gives total health, maintains youth, reduces anxiety and stress, and increases mental power and concentration. This Yogasana brings harmony to the body and mind.

The asana should not be practiced by people suffering from an enlarged liver, cervical spondylitis, slipped disc, high blood pressure, any heart ailment, eye disorder, or thrombosis.

The Sarvangasana is intended to promote the secretion of thyroids and through it keep the whole body functions in order. In this asana, the thyroid glands receive a good supply of blood. Healthy thyroid means healthy functioning of the circulatory, respiratory, alimentary, and genito-urinary systems of the body. Sarvangasana Yoga is a good substitute for modern thyroid treatment. It even cures dreadful leprosy.

Beginners should be careful while practicing Sarvangasana as the elbows could slide apart, or even the hand could slide on the back. This will cause the upper arms to roll inwards, which, in turn, will result in the torso sinking onto the upper back, therefore, collapsing the pose and also harming the neck. Use a blanket to support the shoulders as a solution.

The Sarvangasana is clubbed with Uttanpadasana and the Halasana in most of the Yoga classes. The asana should be followed by Matsyasana.