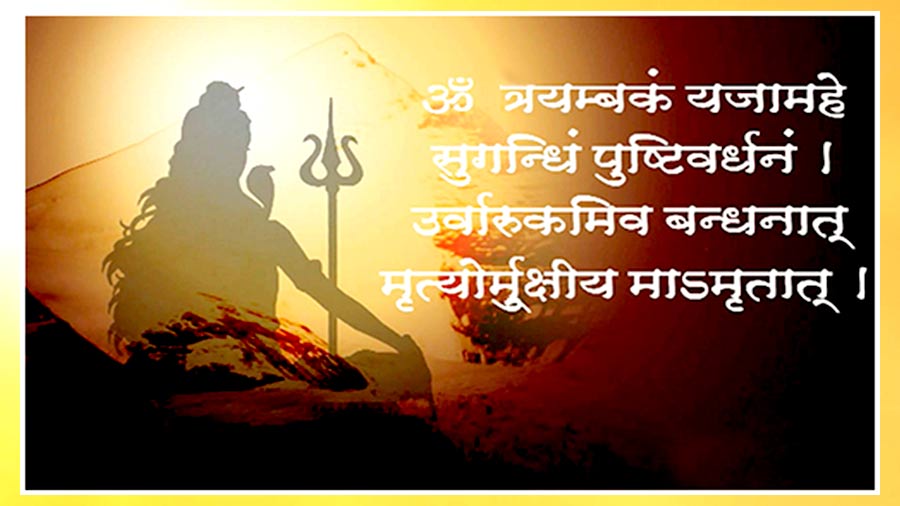 Maha Mrityunjaya Mantra (महामृत्युंजय मंत्र), also called Tryambakam Mantra or Rudra Mantra, is one of the oldest and most important Mantras in Hindu mythology. It is considered the most powerful Mantra of Lord Shiva, the three-eyed God.

It is believed in Hindu mythology that Sage Markandeya was the only person who had the knowledge of the power and value of the Maha Mrityunjaya mantra. It is said that the Moon was once in trouble because of the curse by King Daksha. At that time, Sage Markandeya gave this Mantra to Sati, Daksha’s daughter, to help the Moon. By reciting this mantra, the effect of the curse of King Daksha diminished, and Shiva then took the moon and placed it upon his head.

Om – One of the most sacred sounds in the universe

Yajamahe – One who is prayed or worshiped

Pushti Vardhanam – Who nourishes and grows all beings

Urvarukmiv  – As the ripened cucumber

Bandhanan –  Liberated from the captivity or bonding

Mukshiya – Free us or send us heaven

Maamritat – Immortal (for the sake of mortality)

We worship Lord Shiva (The Three-Eyed Lord), who is fragrant and who nourishes and grows all beings. As the ripened cucumber is automatically liberated from its bondage to the creeper, may He liberate us from death, for the sake of immortality.

Lord Shiva is a three-eyed God and is referred to as Tryambakam. The third eye of Lord Shiva is located in the space between the eyebrows and can be opened by the powers of penance and meditation or when one experiences a spiritual awakening. So, in spiritual terms, when we pray to Lord Shiva, we are seeking his blessings and assistance in opening our third eye of spiritual knowledge.

The natural consequence of this awakening is that we will be led towards spiritual liberation or moksha, and attain freedom from the cycles of death and rebirth. The goal of chanting this mantra is to evolve spiritually so that we can free ourselves and Lord Shiva can free us from our bondage of all the material things that bind us.