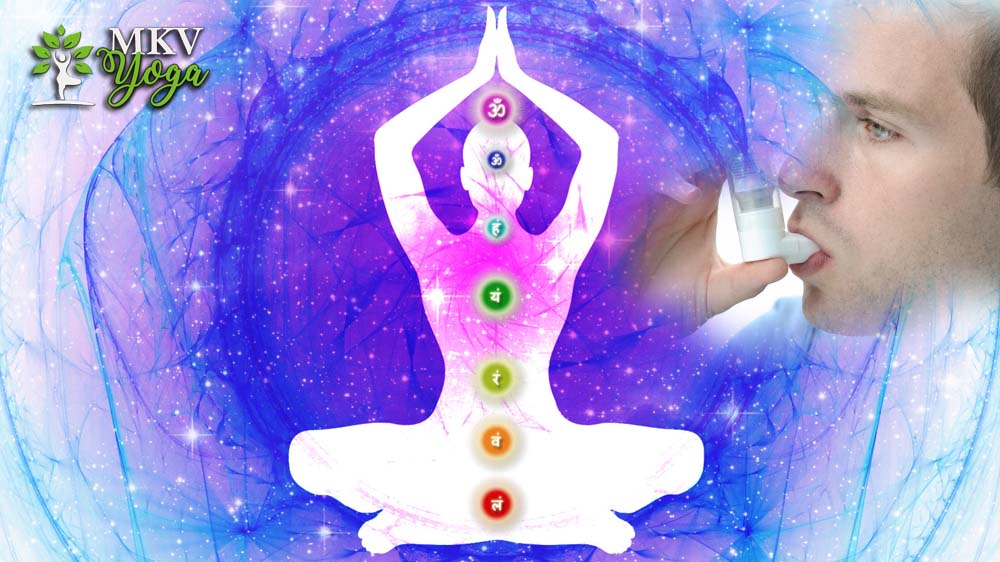 Asthma is a disease of the lower respiratory tract. When the parasympathetic nervous system becomes overactive, it causes narrowing of the bronchioles and outpouring of excessive mucus into the lumen of the bronchioles (which in acute attacks particularly), resulting in Asthma. Yogasanas and Pranayama along with many other Yogic kriyas detailed hereunder can be a big boon for an Asthmatic patient as far as treatment of Asthma through Yoga is concerned.

Asthma can be defined as a respiratory condition marked by attacks of spasm in the bronchi of the lungs, causing difficulty in breathing.

In a person with asthma, the inside walls of the airways, called bronchial tubes, become swollen. This swelling or inflammation makes the airways extremely sensitive to irritations and increases their susceptibility to an allergic reaction. In the allergic reaction, the airways swell, and the muscles around the airway tighten, causing difficulty for air to move in and out of the lungs.

Allergic Asthma generally occurs at an early age and especially in males. It is sudden in onset and may come at any time. It is associated with a feeling of tightness in the chest zone. The other symptoms include expiration becoming exhausting and the inspiration becoming short and gasping. Wheezing expiratory sound can be heard. Unproductive coughing occurs and the pulse becomes rapid.

Chronic asthma occurs in the later stages of life and generally in females. The cause of this type may be hereditary. It is associated with continuous wheezing and breathlessness on exertion. A cough and recurrence of respiratory infection are other common features.

The yogic view of the cause of Asthma is that it is caused by emotional factors. Once the root cause, which results in a patient’s emotional stress, is removed, the disease is cured. This is a general and a primary statement. For the yogic treatment or yogic management of bronchial asthma, the following Yogic Kriyas can be adopted –

The practice of Laghu Shankhpraskshlana cleanses all the unwanted elements from the intestine and should be done under the guidance of a Yoga expert. This cleansing effect gives great relief to a patient suffering from Asthma.

Depending on the patient’s age and strength, the practice of Jal Dhouti can be recommended once a week, thrice a fortnight, and in some cases continuously for seven days. Kunjal also removes unwanted elements from the elementary canal, relieving the one greatly from Asthma.

The practice of Jal Neti every day. Neti cleanses the nasal passage, releasing constricted upper airways and increasing the flow of breath. It should be done every day by an asthma patient.

The above three practices purify and detoxify the body and its internal systems. Imbalances in the body, which are due to irregular lifestyle, including irregularity in eating habits, are overcome with the detoxification of the body. The internal systems of the body are also regulated. The above three practices play a great role to balance the three ‘doshas’ or in the body: ‘Kapha’, the mucous; ‘Pitta’, the bile; and ‘Vata’, the wind. Both Ayurveda and Hatha Yoga say that imbalance in the above stated three doshas results in illness.

In general, all forward and backward bending asanas are useful for a patient suffering from asthma. The following Yoga Asanas can be best and tried by him –

Surya Namaskar is said to be a complete sadhana and its benefits include the revitalization of the whole body as it exercises the entire body in twelve movements. All the twelve poses are basically a combination of forward and backward bends and make the best series for Asthma treatment.

In Shashankasana, the adrenal glands are reactivated to secrete more adrenaline. The excess secretion of adrenaline hormone helps the asthmatic patient at the time of the asthmatic attack. The asana encourages deep inhalation and complete exhalation helping people suffering from asthma.

It is one of the most powerful abdominal exercises that massages and stimulates the abdominal viscera, including the adrenal gland, encouraging adrenaline secretion. The asana is a forward bending asana and contracts the lungs allowing the practitioner with an increased flow of breath.

Sarvangasana is an inversion and is very good for people suffering from asthma and other respiratory problems.

The asana improves and deepens the breathing of the practitioner as it opens up the chest giving a stretching effect to the lungs, thus helping a patient of Asthma.

Dhanurassana also stretches the lungs and hence again deepens the breath of the practitioner and thus is very good asana for asthma treatment.

Chakrasana too stretches the lungs and further stimulates and influences all the hormonal secretions, including the adrenal gland. It is also a great asana for asthmatic patients.

Pranayama directly influences the respiratory centers of the brain. This results in the patient gaining higher control over the movement of respiratory muscles and the pattern of thought, feeling, and general behavior. This is fundamental in the Yogic management of asthma.

Kapal Bhati has a cleansing effect on the lungs and is a good practice for respiratory disorders. How to do Kapal Bhati and to know further details, the post on Kapal Bhati will help – Kapal Bhati Pranayama (The Frontal Brain Cleansing Breath)

The practitioner gets a higher concentration, gets rid of anxiety and stress, gets clarity of thoughts, and tranquility of mind. Details of the pranayama can be had in the post – Nadi Shodhana Pranayama – Alternate Nostril Breathing Technique and Benefits.

The deep state of relaxation achieved through meditation helps the body processes recuperate to its normal level of activity.

Relaxation removes the tension in the respiratory muscles helping the patient with Asthma to breathe more efficiently. This is reflected in increased breath holding time.

Uddiyan bandh and some asanas push the abdominal wall inside so that the diaphragm rises further into the chest and helps the lungs to be empty efficiently.

If the above-stated Yogic practices are incorporated into a daily lifestyle, the severity and frequency of asthma attacks diminish progressively and cure may be possible in certain cases.

Doctors say that there is no cure for asthma. However, there are medical treatments that can prevent allergic reactions as well as treat asthma symptoms.

Doctors may also prescribe treatments to reduce airway irritation if a person experiences an asthma attack, and to prevent asthma symptoms and airway inflammation over the long term.

How To Cure Depression Through Yoga